Monuments and sculptures of Nicholas Quarter 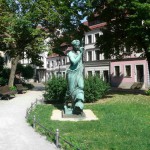 Clio is a base figure of the equestrian statue of Frederick William III., which was once found in the Lustgarten. The equestrian statue originally consisted of six figures, was unveiled in 1871 and the figures were finally placed in 1876. In the 2nd World War the monument was melted down. Only two figures remained relatively undamaged. One is Klio “The Muse of History” and the other “science” – both are now located behind the St. Nicholas Church.

The left hand of the base figure was once touching the monument base, while the right hand wrote.

The allegory of science
Sculptor Albert Wolff (1814 – 1897)
Location: behind the Church of St. Nicholas 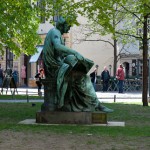 The “Allegory of science” just like “Clio – The Muse of History”, is a base figure of the equestrian statue of Frederick William III. The equestrian statue was originally made of six figures base, was unveiled in 1871 and the figures were finally placed 1876. During the 2nd World War II the monument was melted down. Only two figures remained relatively undamaged. One is the “Allegory of Science” and the other “Clio – the Muse of History” – located in front of St. Nicholas Church. The two 3m high bronze figures were moved to the Nikolai Quarter in 1987. The “Allegory of science” represents a thoughtful man who braces reading a great book with the right hand against his thigh. With his left hand he holds a globe on the other leg. Another figure which was part of the original ensemble, “Genius of Science”, is now at the Heinrich-von-Kleist Park in Schöneberg. 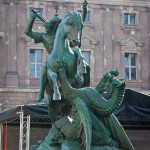 Saint George, who kills the dragon on horseback and, according to legend, not only freed the princess from the monster, but an entire city, is one of the most photographed monuments in Berlin. The 6m high statue group by sculptor August Kiss (1802 – 1865) is fascinating for its detailed design. Until the demolition of the Stadtschloss, the monument was located in it’s courtyard, later in Friedrichshain park. With the reconstruction of the Nikolaiviertel the equestrian statue has found a proper place in Berlin’s historic center. Right by the Spree River and facing the oldest church in the city – St. Nicholas Church. From March 2010 to June 2011, the figure and the base have been painstakingly restored. The total cost was € 120,000. The equestrian statue is placed somewhere between late Classicism and Neo-Baroque. August Kiss was born in 1802 in Silesia and died in 1865 in Berlin. Kiss has created more famous works, for example the equestrian statue of Frederick the Great in Breslau or the statue of Frederick William in Potsdam. All christian churches remember Saint George on 23rd April. St. George was a martyr of the early fourth century, in the time of persecution of Christians under the Roman Emperor Diocletian. Over the centuries, legends formed around him. The most important of these is preserved in the “Legend aurea”, a collection of stories of the 12th St. Century. 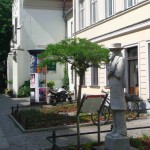 The half-ton limestone sculpture is a tribute to painter and Berlin original Heinrich Zille (1858 – 1929). “Surprisingly emaciated” is inscribed on the plaque nearby – because Zille enjoyed lush corpulence. But that was the suggestion of the artist, the presentation of one of the most prominent Berliners merging with his characters. The people with whom Zille lived and whom he has drawn. Nearby, a few steps toward the river Spree, is the Zille Museum. There, visitors can learn more about the life and work of the 80th honorary citizen of Berlin. There is even a Zille store, with literature, postcards and more to buy. Located at Nikolaikirchplatz, be sure to visit the “Theater im Nikolaiviertel” – where you can hear the famous “Berlin snout” in an impressive theatrical performance to “Zille’s Milljöh” – Zille’s neighborhood.